A lot of things have changed since May 2021, and the multinational Special Operations Forces Exercise (SOFEX) Black Swan 2022 will be tracking these changes as well. The preparations and the organization of the exercise are much more challenging, there are more elements involved and the tasks are more complex – the participants will not have an easy time…

“For the first time this year, Trojan Footprint – the premier annual special operations forces exercise in Europe, in conjunction with which Black Swan is also to be held – will be conducted from the Baltic Sea to the Black Sea to cover NATO’s entire eastern flank. This will be a quite pronounced change for us, too”, pointed out Major General Tamás Sándor, Inspector for Special Operations of the Hungarian Defence Forces Command. This also means that several elements corresponding to the Szolnok-based Regional Special Operations Component Command (R-SOCC) will be operating in parallel during the exercise.

“Basically, during the exercise, we will focus our activities on two areas in Hungary.” Having the component command in Szolnok, American, Austrian and Romanian SF task groups will be training under the command of a Hungarian Special Operations Task Group (SOTG), and we will also set up a combat infantry capability in Újdörögd with the help of the Polish troops joining us”, added the general.

Another change is that for the first time this year, two Eurofighter Typhoon FGR.4 multi-role combat aircraft will arrive in Hungary from the British Royal Air Force (RAF) for the duration of the exercise; these aircraft will fly close air support (CAS) missions for the SOF units. 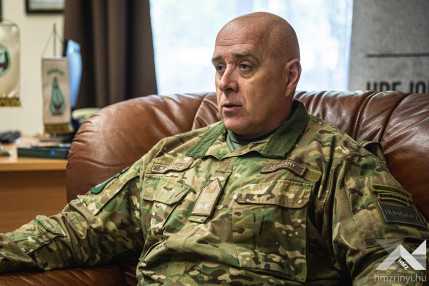 The preparations and the conduct of the exercise stretching from north to south are to be implemented on the basis of a single complex operations plan, the operation order (OPORD) prepared by the US Special Operations Command Europe (SOCEUR), which will be used by everyone during their work. Accordingly, the already mentioned operational commands will be acting in the interest of a common operational objective. For us, this presents an extra task insofar as we have to continuously maintain contact with the neighboring commands, and obviously, we have to prove to the US SOCEUR and also to the Hungarian Defence Forces Command that we are able to plan, coordinate, synchronize, lead and successfully accomplish special operations. Year after year, the Black Swan exercise series involves more and more elements, and for us, this is an essential and necessary training process for reaching Full Operational Capability (FOC) by the end of 2024, and for subsequently being able to go on stand-by as the NATO SOF Response Force in 2025”, said Major General Tamás Sándor.

“Several participants are going to arrive from Hungary, too: besides the already »usual« capabilities that have been an integral part of the exercises since the beginnings – such as psychological operations, civil-military cooperation and cyberspace operations – this year the nominated personnel of the Counter-Terrorism Centre (CTC) will also participate in Black Swan. This also helps us to construct the exercise in compliance with the principles of national defence that involves whole-of-government tasks and increasingly in line with real-life circumstances, by involving partner organs. This year’s exercise will be dedicated to analyzing and evaluating the system itself. This includes, for example, questions like how information sharing works, how tasks identified as non-military ones are assigned to the CTC, how operational support can be managed. A lot of minor details emerge, and now we would like to test our solutions to them”, listed the general, adding that naturally, the additional tasks entail extra workload: in comparison with 2021, this year’s Black Swan brings a pronounced increase of the tasks. This, however, is part of a process which, once completed, will enable the participants to reach the level required by NATO for going on a yearlong stand-by service in 2025. “We expect that the closer we approach this date, the more numerous our tasks will be; deadlines will continue to shorten and the pressure on the training audience and the exercise staff will be building up”, pointed out the major general.

In 2022, we will be assigned the designated tasks of assembling an SOF air capability and integrating it into an air component, to be established under Hungarian command as well, underlined the general. At the end of this process, which has taken years of work, this year a SOF air component will be operating during Black Swan, based on our already acquired capabilities, and with the involvement of aircraft and aircrews of the HDF 86th Szolnok Helicopter Base. This, again, is a major leading role even in NATO’s present structure, and at once an important step towards the capabilities of our 2025 commitment. 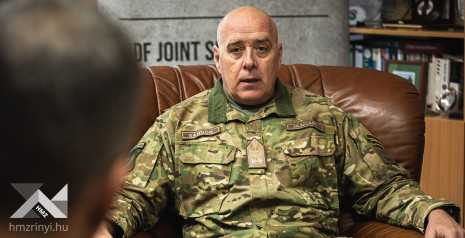 In addition, partly based on the Ukraine experiences, cyber and information operations will play an important role, but fortunately, we have already had very good relations so far with Brigadier General Dr. László Kovács, Inspector of the Hungarian Defence Forces Command Cyber Inspectorate and also with the HDF Cyber and Information Operations Centre. Thanks to this excellent relationship and to the professional experts of the Centre, at present we have cyber defence capability on the level of commands and task groups. We have to continue this construction, since although it is improbable that an independent, robust cyber capability would be deployed as part of a special operations task group itself, we have to know what items of information we can extract or share in the event of a cyber incident in virtual space, and what channel it will flow in to what end point. During the exercise, we will be tasked with testing the speed of information flowing from us, the end users, for example, to the Szentendre-based HDF Cyber and Information Centre. And, of course, we will also test the kind of capabilities available there for providing us with immediate and efficient support throughout the execution of our own operations”, told us Major General Tamás Sándor.

The pre-exercise training of the international staff for the SOFEX Black Swan 2022 is to start in the last week of April. During this, participating nations go over the emerging tactical situation and the operation orders they receive. Tamás Sándor emphasized that the operation order issued by the Szolnok-based R-SOCC is also a product of international cooperation, since planners from all partner nations contributed to its preparation. During the staff training, the participants will receive an OPORD brief, and then discuss all elements of the Standard Operating Procedures (SOP): what the system of information management is, who communicates with whom, what the types of the interfaces are. This is followed with “battle drills”, where a number contingencies will be modelled to practice, for example the things they need to do when they are informed about an isolated soldier who got separated from his unit, or when a friendly helicopter makes a forced landing.

The SOFEX Black Swan 2022 itself will start on 2 May – in the area of Hungary and in several states of the region as well. During the exercise, a Hungarian special operations task group, for instance, will be operating in Romania in conjunction with the forces there, while another SOTG will be working together with the Slovak and Czech colleagues in Slovakia. According to plans, the members of the Ram-Air Free Fall Team of the HDF 2nd Special Operations Brigade – which already underwent an Arctic skill-enhancing training course in Alaska last year – will execute jumps in Norway, and then go on to carry out the reconnaissance mission assigned to them.

“To be conducted in the areas of three countries, Black Swan 2022 has grown into a multinational exercise involving more than 600 troops and other participants”, said the general, adding that besides the Hungarian forces, American, British, Czech, Croatian, Polish, Romanian, Slovak, Slovenian and Austrian service personnel will implement in reality what the planners have produced as a result of lengthy work in the form of documentations, computer programs and operation orders.