The Deputy Commander of the Hungarian Defence Forces (HDF), Major General Zsolt Sándor, welcomed General Lanchares at the HDF Headquarters in Székesfehérvár, some 60 km south-west of Budapest. The generals discussed topics of common interest, including the challenges of capability building. General Sándor pointed out that Hungary needs to invest in strengthening its military capabilities and expressed his hope that NATO would support Hungary on this path. 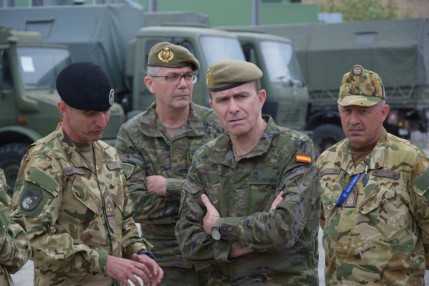 General Lanchares then visited NATO's recently activated Headquarters Multinational Division Centre (HQ MND-C), co-located in Székesfehérvár, where he received a brief from the Chief of Staff, Brigadier General Ernő Péter Siposs, on the current status of capabilities and activities and HQ MND-C's progress towards becoming a fully operational NATO HQ.

The general's next appointment was with the Hungarian National Defence Command (HNDC), where he received a briefing on the HDF force development programme, the Hungarian deployments to missions abroad and the progress on the establishment of the new enhanced Vigilance Activity (eVA) Battlegroup in Hungary.

DCOM then met with the NATO Force Integration Unit Hungary (NFIU HUN), where its Commander, Colonel István Topor, explained the NFIU's posture and tasks and its cooperation with the HDF in respect to NATO operations and activities. NFIUs serve to coordinate the integration of NATO units with the respective Host Nation in various countries on NATO's Eastern Flank.

The last stop of General Lanchares' tour was the HDF 25th Infantry Brigade at Tata, around 70 km north-west of Budapest, where the Chief of Staff, Colonel István Kása, explained its structure and the current status of the integration of the Hungarian eVA Battlegroup into the 25th Brigade. The visit ended with a static display of the Brigade's main combat vehicles and equipment. 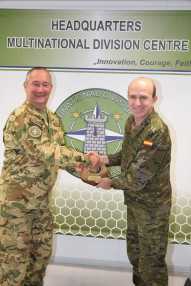 Thanking his Hungarian hosts for these valuable insights, General Lanchares underlined the common ideals and values that all NATO nations share, which allow them to maintain highly capable, flexible and interoperable multinational joint forces. These forces are the foundation of a resilient Alliance – able to deter any threat and defend NATO's territory whenever and wherever they are needed.