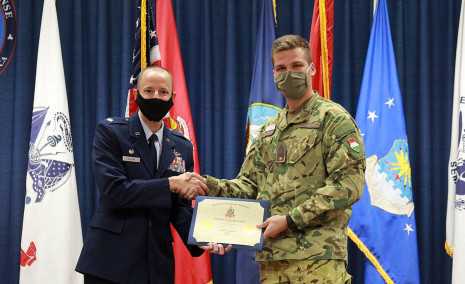 The language course had a dual training goal: to provide international students with language training to prepare them for the further course they were to attend, and to introduce them to the USA and American culture. The Defence English Language Program was conducted at Joint Base San Antonio–Lackland (JBSA Lackland, Texas), at the Defense Language Institute English Language Center (DLIELC), and it required the students to take an English Comprehension Level (ECL) entry test.

During the first six weeks, the students learned the terminology, phraseology and procedures necessary for military aviation, whereas in the remaining four weeks they learned about general American and military culture. In what followed, Lieutenant Gyula Sonnewend traveled to the next training location, Keesler Air Force Base, Biloxi, Mississippi. During the 14-week ATC Apprentice Course, the students’ performance and progress was being monitored by supervisors on a daily basis – with the use of academic tests during the first block of instruction, and on the basis of their performance in simulations during the second and third blocks. Furthermore, each block of instruction involved two Progression Checks to test the relevant part of the Specialty Training Standard (STS).

Based on the scores of the Progression Checks, the students’ overall average results were calculated at the end of the course As Lieutenant Gyula Sonnewend completed the course with 95%, he is entitled to hold the Distinguished Graduate title. Unlike on the language course, here he had only American classmates, airmen coming from the United States Air Force (USAF).

An interesting difference is that while in the Hungarian Defence Forces, Air Traffic Controller is a military occupational specialty for officers, in the USAF it is initially undertaken by enlisted personnel, who may take years to graduate to the NCO rank.