In focus: Ukraine and the Balkans 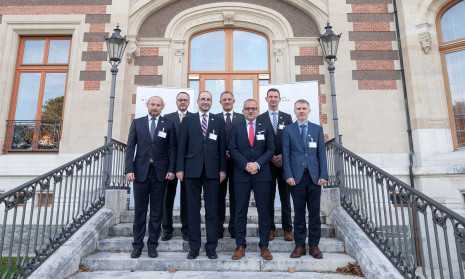 On the first of the meeting, the Defence Policy Directors held a CEDC-level (Krems format) meeting, then the next day they held another meeting in the CEDC+ format to include their partners from the Western Balkans. High on the agenda of their discussions was the assessment of the regional impacts of the war in Ukraine as well as the activity of the 2022 Austrian chairmanship of the CEDC.

As for the war in Ukraine, the Defence Policy Directors agreed that although it is quite understandable that presently all attention is focused on Ukraine, it is also important not to forget about the Western Balkans, where the security situation continues to be very fragile. In this spirit, they unanimously emphasized the importance of maintaining ongoing military operations in the region (EUFOR Althea, NATO KFOR) and of accelerating the European integration of the region. Speaking about this issue, Deputy State Secretary László Hajnik also noted that in support of the stability and security of the Western Balkans, Hungary considers it important for the states of the region to be able to obtain the highest possible share of the resources available within the European Peace Facility (EPF). Currently, the major proportion of the European Peace Facility’s resources is being allocated to support Ukraine, however, at the same time, given the global focus of the EPF, it is important that other regions, among them especially the Western Balkans, can also have a share of it.

Concerning the work of the 2022 Austrian CEDC chairmanship, the Defence Policy Directors concluded that besides serving as an important forum for defence dialogue among regional states, last year the CEDC helped with the strengthening of defence relations among the countries of the region through innumerable practical cooperation programs (workshops, courses, practice). Mention must also be made of the efforts aimed at involving as many Western Balkan states in the chairmanship programs as possible, thereby strengthening the practical cooperation with them.

As Deputy State Secretary László Hajnik said, it is of paramount interest to Hungary to make sure that the cooperation with the Western Balkans partners will continue into next year’s Czech chairmanship. To end the Austrian CEDC chairmanship, the Defence Ministers of member countries will hold a meeting in Krems, Austria between 1–2 December 2022.