“Defence industry is essential because it creates jobs, helps the economy further grow”, and provides security as well, said Defence Minister Kristóf Szalay-Bobrovniczky during the fourth episode of a podcast entitled “The Bold Truth About Hungary” – hosted by State Secretary for International Communication and Relations of the Prime Minister’s Cabinet Office Zoltán Kovács –, which appeared on Wednesday, 30 November. 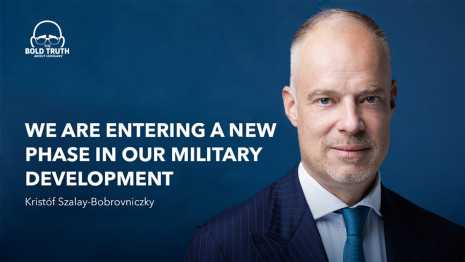 Kristóf Szalay-Bobrovniczky said that “we may want to recall the moments when the Berlin Wall fell, and we found ourselves with a Soviet-doctrine, unpopular mass army equipped with Soviet technology.” Then, following that, “for two decades roughly, mainly due to the negligence of the left-wing governments, that army, that heritage of ours has been completely ruined, I dare say, all the equipment has been put aside, sold, and also the personnel, the soldiers have been reduced in numbers greatly.” Soon after joining NATO, Hungary stopped the conscripted recruitment. Therefore, the Hungarian military has become a completely all-volunteer army, “and the then government forgot to arrange a reservist system around it. And then, when our government came into power, […] that was the moment when we eventually could turn on the development of our army.” Finally, in around 2016, the current government started the armed forces development program, said the Minister of Defence.

In connection with that, Zoltán Kovács noted that “we have also seen Hungary’s opposition, but also the European left actually attacking any kind of reconsideration if it was about rearmament, if it was about a meaningful, considerable military force in the member states of the European Union.” Kristóf Szalay-Bobrovniczky added that “the progressive left predicted that the world peace would break out and therefore no armies are needed, and NATO has become almost obsolete. […] Defence industry is essential, not only because it brings jobs and helps the economy further grow, but also because it makes sure that our procurement prices are better and more competitive. But most importantly, because of our security, because we do not rely then on foreign suppliers and our supply chains can be uninterrupted, and we can procure the necessary items, ammunition and other items from our own defence industry”, emphasized the Minister of Defence.

Speaking about the North Atlantic Treaty Organization, Zoltán Kovács said that “many believe […] that NATO is an existing force itself, and that NATO is going to come to our help if required. But we all know that NATO is nothing but the joint effort of the member states.”

Kristóf Szalay-Bobrovniczky stated that “NATO is us, really”, pointing out that that is one of the reasons why Hungary is building a strong national army, because „if other nations do so, as they do…then together we can count on each other”.

The Minister of Defence also added that Hungary is entering a new phase of the armed forces development program, and “much of it comes from the conclusions of the Russo-Ukrainian war. […] We are now opening a new phase in our development program, which is the taking on board of the newest technology, and then combine everything together in a strong national army […] The real goal is, of course, deterrence, to show enough force, both in terms of physical equipment and determination, which means experienced, brave, well-skilled, good soldiers combined”, said Kristóf Szalay-Bobrovniczky.

He went on saying that “the size of our army is, according to the number that the Parliament approved for us, is 37,500 […] We need to fulfil that, and also at least double the number in the coming years. […] We also need to increase the number of our reservists.” Therefore, “we are going to focus on both legs: the personnel development and then the new technology coming in. So that combined will be our new force”, stated Kristóf Szalay-Bobrovniczky.

The Minister of Defence was of the opinion that the Russo-Ukrainian war will continue, and as long as “the conflict is open and armed and ongoing, anything can really happen”. Of course, those on the Hungarian defence side do everything possible to protect Hungarian citizens and borders. “But such accidental spillovers (such as the missile hitting Poland) cannot be really totally excluded”, the minister said, adding that in such moments it is very important “that strategic calm takes over in everybody’s mind”.

Meanwhile, “there is nothing else other than encouraging peace and calling everybody’s attention to the avoidance of potential escalatory steps, but to build a strong national army, which we are doing by the day”, stated the Minister of Defence.