MINISTER OF DEFENCE SZALAY-BOBROVNICZKY: HUNGARY CALLS FOR AN IMMEDIATE CEASEFIRE AND PEACE NEGOTIATIONS

Hungary is on the side of peace, the return of peace into Europe as soon as possible is in the country’s interest, therefore our country calls for an immediate ceasefire and peace negotiations, the Minister of Defence announced in Brussels, after the two-day conference of the defence ministers of the NATO member states, on Friday, 14th October. 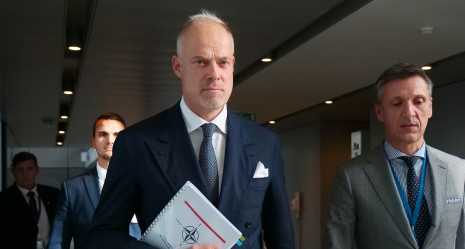 Speaking to Hungarian journalists, Mr Szalay-Bobrovniczky said, Hungary calls upon the involved parties to sit down to the negotiating table immediately and put an end to the carnage. He stated that that NATO’s staying out of the Russo-Ukrainian war is in Hungary's interest. NATO must not allow to be yielded to any kind of escalation pressure, or to be involved in the war as an organization. Hungary does not want to be drawn into the war, and in order to protect the Hungarian community in the Transcarpathian region, it will not send lethal weapons to Ukraine, he added.

The Hungarian Minister of Defence stated, for the security of the Hungarian people, the most important thing for Hungary is to have a well-prepared, well-trained, and independent army. Since peace requires strength, Hungary is working on its force development, he added. In this regard, the minister noted that in 2014 the NATO member states undertook to achieve the goal of spending at least 2 percent of their GDP on defence by 2024. As he pointed out, Hungary is among the well-performing member states, it will meet the agreed GDP-proportionate defence spending next year; that is a year earlier. This enables Hungary to continue its military development, he said.

Answering a question, the minister said that in addition to the four Battle Groups that previously existed on NATO's eastern flank the Alliance established another four ones, including one in Hungary, in response to the outbreak of war. Relying on its national forces, Hungary comprises the framework nation of the Battle Group with full operational capability, set up in the spring, which consists of international forces as well, including Italian, Croatian, Turkish, and American troops – he said. 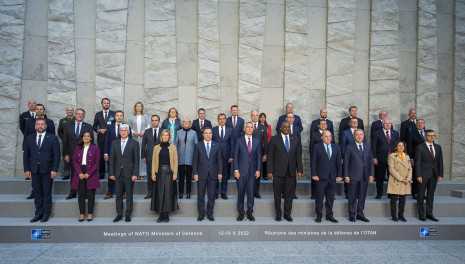 Mr Szalay-Bobrovniczky reminded that in the recent past the command of NATO's international peacekeeping mission in Kosovo (KFOR) had been the responsibility of the Hungarian Defence Forces. In this regard, he emphasized that the stability of the Western Balkans is of particular importance to Hungary. Migration pressure is increasing on the country's southern border, which makes peace in the countries of the region of high importance.

In conclusion, the minister said, NATO Secretary General Jens Soltenberg emphasised at their bilateral meeting that Hungary is an esteemed and recognized member of the Alliance. Mr Szalay-Bobrovniczky noted, the Secretary General acknowledged that Hungary's hard work and commitments in the Alliance have borne fruit. Stoltenberg also emphasized that Hungary's commitments and achievements represent real value for NATO and contribute to the security of the military alliance, the Minister of Defence announced.