Together we are stronger! V4 - cooperation for building the security of our part of Europe

The results of the last NATO summit in Brussels and current European initiatives in the field of defense and security were the topics of the second day of the meeting of defense ministers of the Visegrad Group, which was held in Elbląg under the chairmanship of Minister Mariusz Błaszczak. 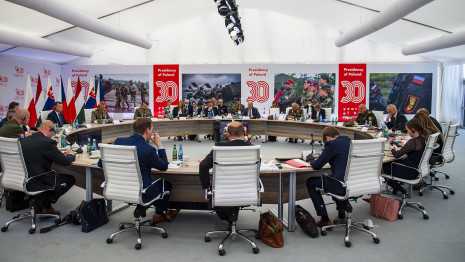 On Monday, June 21, during a meeting at the Headquarters of the Multinational Division North-East in Elbląg, the defense ministers of the Visegrad Group (V4) signed a letter of intent regarding cooperation in the area of strategic communication between Poland, the Czech Republic, Slovakia and Hungary. The initiator of tightening cooperation in the StratCom area and signing the letter is the Academic Center for Strategic Communication at the War Studies Academy in Warsaw.

- I appreciate the solidarity in the Visegrad Group and that we share opinions on the current threats. We cooperate together within the Visegrad Group, the European Union and the North Atlantic Alliance. Thanks to this, we build and strengthen our security and deter potential aggressors - said Minister Mariusz Błaszczak during the second day of the meeting of defense ministers of the Visegrad Group.

- Our discussion has been divided into 3 blocks. The first block concerned cooperation within the Visegrad Group. Here we prepare ourselves to be on stand-by within the framework of the European Battle Group. In 2023 the battle group composed of the countries making up the Visegrad Group will be on duty for the third time. As part of the cooperation in the North Atlantic Treaty Organization, we discussed the last meeting of heads of states that took place a week ago in Brussels. We agreed on the importance of the issues raised during the NATO summit and the assessment of this meeting. We also talked about cooperation within the EU. We are open to new initiatives. Our common goal is to ensure security - emphasized the head of the Polish Ministry of Defense.

The document signed today meets the challenges faced by the V4 countries in the area of strategic communication - Minister Mariusz Błaszczak emphasized during the meeting. Seeing the need to share information on StratCom in defense matters, ministers want to raise awareness of the national, regional and global StratCom environment in their countries.

- I would like to thank Minister Mariusz Błaszczak, thanks to whom the Polish Presidency of the Visegrad Group has shown the strength and unity of the entire region. We will continue this cooperation. Today, we have also signed a letter of intent on cooperation within strategic communications, so we are also starting cooperation in this area, said the Czech Deputy Minister, Jan Havránek.

- Thank you for these deliberations, for a very interesting, fruitful conversation between my friends, because this is how I perceive our countries, our nations. These relations are close because we want security in our part of Europe. We cooperate by training, I mean training and exercises of our soldiers. This year, drills were held in Slovakia and Hungary. We also cooperate in the North Atlantic Alliance, European Union and UN format. We cooperate wherever we can train our soldiers and increase the interoperability of our armed forces. An important place for our cooperation is the Command of the Multinational Division North-East, here in Elbląg. Soldiers representing the armed forces of all our countries serve in the command - emphasized the head of the Polish Ministry of National Defense.

Before the discussions of the second day, all ministers saw the investment on the Vistula Spit. - This investment has an economic nature, but is also related to security. The connection of Elbląg with the sea creates opportunities for potential military enhancement - stressed Minister Mariusz Błaszczak during the meeting with the heads of the defense ministries.

The head of the Ministry of National Defense recalled that the intensification of cooperation between the V4 countries coincided with the challenges posed by the COVID19 pandemic for the countries of the continent. - I would like to thank for the cooperation in this difficult time. This fundamental difficulty is, of course, an epidemic. We showed solidarity with each other, we helped each other in these difficult times, which proves the close cooperation and friendly relations between our countries. As early as July 1, Hungary takes the presidency. We agreed on the next meetings and the continuation of all the plans that we set before ourselves - he said.

The Visegrad Group (V4) is one of the main formats of cooperation between Central European countries, the members of which are Poland, the Czech Republic, Slovakia and Hungary. The date of establishing the V4 is assumed to be February 15, 1991. The primary goal of the Group was to support each other on the way to the European Union and NATO membership. Currently, cooperation takes place on many levels. From July 1, 2020, Poland held the annual presidency of the V4 and on June 30 this year the responsibilities will be handed over to Hungary.

On Sunday, June 20, a two-day forum of the V4 defense ministers began in Gdynia. Defense ministers: Polish - Mariusz Błaszczak, Hungrian - Tibor Benkő, Slovak - Jaroslav Nad and Czech Republic (Deputy Minister) Jan Havránek, summed up the cooperation of the V4 during the Polish presidency of the Visegrad Group, lasting from June 30, 2020. During the forum, the progress in jointly implemented defense projects was also discussed, including preparations of the EU Visegrad Battle Group for on-call duty in 2023.

The signed letter of intent regarding cooperation in the field of strategic communication of the Visegrad Group countries also gives the opportunity to cooperate between academic institutions, including: the Academic Center for Strategic Communication, which operates at the War Studies Academy in Warsaw, the The Armed Forces Academy of General Milan Rastislav Štefánik in Liptovsky Mikulas, The Doctoral School of Military Sciences, National University of Public Service in Budapest and the University of Defence in Brno.