On Monday, 22 November Lieutenant General Zoltán Mihócza, Chief of Staff, Hungarian Defence Forces Command (HDFC) received in his office Colonel Idan Katz, the new Israeli defence attaché taking office. During their discussion, the two sides reviewed the ongoing cooperation in the field of education and training, as well as the possibilities for the development of armed forces modernization. 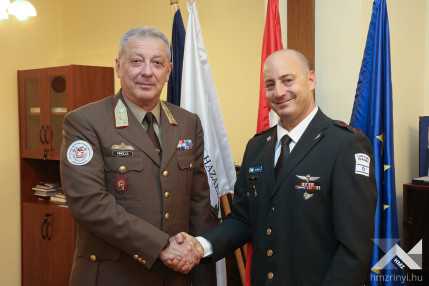 The chief of staff of the Hungarian Defence Forces Command emphasized that the cooperation in the field of military technology – which has been intensifying over the last few years – excellently exemplifies the high-level military-to-military relations between the two countries. Moreover, bilateral cooperation in the fields of education and training has been taken to the next level, as a result of which, starting this November, two Hungarian officers will attend the battalion commander course of the Israeli Defence Forces every year.

In his answer, Israel’s defence attaché accredited to Budapest said that the continuity of cooperation between the two countries strengthens military-to-military relations, which contributes to the development of our defence capabilities.

At the close of the discussion, the two sides reaffirmed that they would give priority to the possibilities of cooperation and development between the two countries in the future, too, and hold regular consultations on potential areas to widen the scope of military-to-military relations.