On 26 October, defence policy directors of the Central European Defence Cooperation (CEDC) and the countries of the Western Balkans met in Trakošćan, Croatia. Hungary was represented at the meeting by Dr. Gergely Németh, Deputy State Secretary for Defence Policy of the Ministry of Defence.

The central topic of the discussion was the Western Balkan states’ accession to the European Union. The defence policy directors talked over the current state of the European integration process of the Western Balkans and discussed the possibilities for furthering it. During this, they agreed that the soonest possible EU integration of the region is in our common interest. Thus, although this process will take longer than previously expected, we cannot allow the EU or the states aspiring to join it to have their commitment to integration dwindle away. Many have already emphasized that in the absence of integration, this region may easily come under the influence of third states, and this we must not allow to happen. 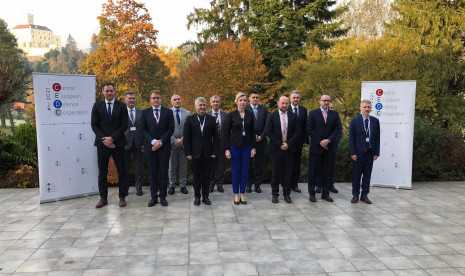 At the meeting, Dr. Gergely Németh reaffirmed that the stability of the Western Balkans is a top priority for Hungary, and in accordance with this, we remain committed to supporting the stabilization and integration efforts of the region in the future. He said that one important element in this was that a Hungarian general had taken over the command of NATO’s KFOR mission in Kosovo for a year as of 15 October. He also emphasized that Hungary stands by the region in the fight against mass illegal migration and the COVID-19 pandemic as well. He called the European integration of the Western Balkans a geostrategic interest of the European Union, and supported the acceleration of the accession process.

Following the consultation with their Western Balkan partners, the CEDC defence policy directors also discussed their expectations about the EU Strategic Compass that is currently being developed and sets the medium-term goals of the Common Security and Defence Policy (CSDP). In connection with this document, they agreed that it must define ambitious and at the same time attainable and most concrete goals for the CSDP, whose implementation will increase the military capacities of the EU.

Speaking about the Strategic Compass, the deputy state secretary pointed out that Hungary has, first and foremost, contributed to the Capability Development Basket of the Compass during its preparation, drawn up a food-for-thought document in this topic and organized a workshop. As for the EU partnerships, he emphasized that Hungary is doing its best to make sure that the EU continues keeping attention to the Western Balkans.

Next time the CEDC and the Western Balkan countries will hold a defence ministerial meeting this December in Croatia.