NATO Ministers of Defence held an extraordinary meeting on Wednesday, 16 March. During the event, they reviewed the status of the initiatives aimed at strengthening NATO’s defence capabilities. In another working session of the meeting – held with the participation of NATO’s distinctive partners, including Ukraine –, they discussed issues relating to the security of NATO’s eastern frontiers. 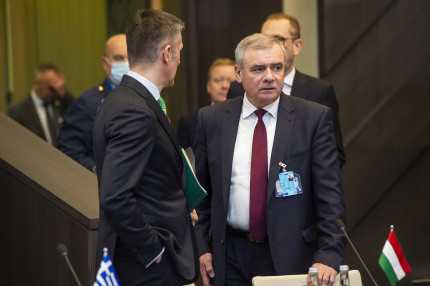 State Secretary for Defence István Szabó represented Hungary at the sessions. He condemned the Russian aggression and made it clear that Hungary is doing its best to mitigate the humanitarian crisis in the wake of the situation in Ukraine. In this framework, the most significant humanitarian aid package in Hungarian history has been assembled, and together with cooperating non-governmental organizations, the Hungarian authorities are working to provide the best possible circumstances for the refugees.

István Szabó also pointed out that in view of the situation emerging in our eastern neighborhood, the North Atlantic Alliance has taken proportionate and defensive measures, which enhance the security of NATO as a whole. At the same time, he emphasized that a fundamental pillar of NATO measures is the development of national armed forces and joint training by the NATO member states. Regarding force development, Hungary sensed the deterioration of the security situation in time, and the armed forces development program has resulted in capabilities that the Hungarian Defence Forces can use to increase the security of Hungarian people in the present situation. Moreover, besides our national capabilities, our capability of international cooperation has also increased to a significant extent in the last few years.

The defence state secretary said that today, together with our NATO partners the Hungarian Defence Forces are able to conduct joint training on an unprecedented level. These exercises involve the armed forces of the United States, Italy, Croatia and other member states. Through enhancing cohesion and interoperability, we support the credibility of NATO’s defence efforts and increase the readiness of the Hungarian Defence Forces as well, added the state secretary.