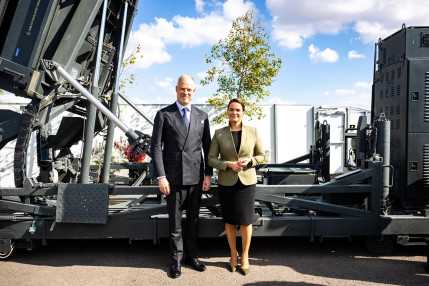 Speaking to journalists in Israel on Wednesday, Defence Minister Kristóf Szalay-Bobrovniczky said that he had arrived in Israel as a government representative to attend meetings that are important for him as minister of defence as well. The president of the State of Israel and the incoming and the outgoing prime ministers had invited President of Hungary Katalin Novák to attend these meetings, and he accompanied her to them. He pointed out that the visit has significance also because the relations between the two countries have been very good for a long time, which also pre-eminently manifests itself in the field of defence. He told the press that, among others, he was introduced the combined air defence system that is worth studying by Hungary, too, especially in connection with Tuesday’s lessons, and also to the very well-built and worldwide known Israeli high-tech cooperation among the Israeli defence industry, the army and the air force.

The air defence system called Iron Dome is actually a combination of radar and missiles, which visualizes flying objects, and is capable of destroying them, thanks to a very high-tech and complex system. It goes without saying that today, all this is very important, emphasized the minister.

He mentioned that they had also visited Yad Vashem, the World Holocaust Remembrance Center in Jerusalem.