On Monday, 10th October, the mandate of Major General Ferenc Kajári expired. For the past year, the Hungarian general has been Commander of KFOR, the international peacekeeping force operating in Kosovo under the command of NATO. 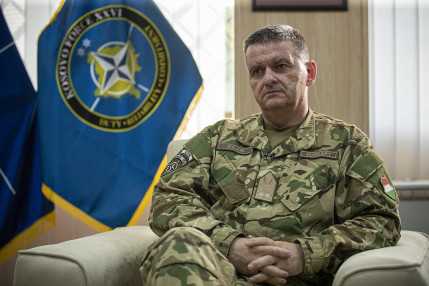 For one year, Major General Ferenc Kajári was KFOR's 26th and first Hungarian commander. In Pristina the leaving commander gave a farewell interview to the news portal KosovaPress.com, in which he evaluated the last year and stated that the general situation in Kosovo is currently calm.

He said, in the past year, many events have taken place in the field of security, for example, a war broke out in Ukraine, and in the summer, there were protests in the northern part of Kosovo. He pointed out that when Russia attacked Ukraine, there was a certain tension and fear among the people of Kosovo, but this passed later.

General Kajári said that KFOR keeps constantly monitoring the situation and no security threat to Kosovo has been experienced generated by the war in Ukraine. He added that the security situation is now stable in all municipalities, including those with ethnic Serbs’ majority. There riots broke out on 31st July after the Kosovo government obliged Serbs living in the country to use Kosovo license plates instead of Serbian ones. The Kosovo Serbs responded with setting up roadblocks and, according to KFOR, some of them were even armed that made the situation dangerous from a security point of view.

General Kajári emphasized that thanks to the responsible behaviour of the Serbian and Albanian sides, the situation could finally be resolved. "I don't want to look for anyone responsible. All politicians and all leaders must weigh their words and avoid extremism leading to an escalation of the situation. The most important thing is to strive to reach an agreement through negotiations, and in addition, unilateral actions, especially violent actions, must be avoided, because they are not the solution," said the Major General.

He reminded that the dialogue between Belgrade and Pristina has been going on for many years, and its purpose is to settle the situation between the parties. The General emphasised, the issues in question must be settled at that level, and then situations similar to the ones in July will be avoided.

According to General Kajári's assessment, in the past year, KFOR managed to function as well as during the previous commands, and it protected peace and security in Kosovo. In 2008, Kosovo unilaterally declared its independence from Serbia, which Belgrade has refused to recognize ever since, and Serbia continues to consider the area, which is mostly inhabited by Albanians, as its southern province.

KFOR was established in 1999 after the end of the Serbia-Kosovo conflict in order to maintain peace in Kosovo. General Kajári has performed foreign service several times. First, in 1996, he served as a liaison and reconnaissance officer in the IFOR mission supporting the settlement of conflicts in Bosnia and Herzegovina, then he served as an advisor of the European Union in the African Union mission in Sudan, and for one term in Afghanistan he served as the intelligence chief of the northern region.

KFOR, which consists of some four thousand soldiers from 28 countries, will be commanded by Italian Major General Angelo Michele Ristuccia during the next year.

SECURITY ISSUES ON THE AGENDA
KFOR MISSION HAS NEW COMMANDER