SECURITY ISSUES ON THE AGENDA

The Hungarian Deputy State Secretary for Defence Policy of the Ministry of Defence participated in the security policy forum held in Budva, Montenegro. Mr László Hajnik had a discussion with the security experts present at the conference with regional and global trends, and current challenges on its agenda. This year, the main issues of the conference's panel discussions and presentations included – among others – the security challenges affecting the Western Balkan region. 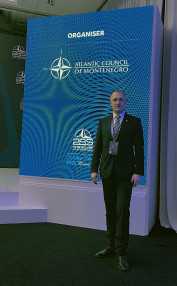 Mr László Hajnik, Deputy Secretary of State for Defence Policy at the Ministry of Defence, represented the Ministry at the 12th To Be Secure FORUM (2BS FORUM) security policy conference held in Budva, Montenegro, from 6th to 8th October. The event is a security policy conference organized annually by the Atlantic Council of Montenegro since 2011, traditionally held in Budva.

The conference deals with issues of global, Euro-Atlantic, and South-Eastern European security, and in addition to the delegates of NATO and of the Alliance's member states, security policy experts and other high-ranking officials from the South-Eastern European and Western Balkans regions also participated. The event brings together heads of state and government, ministers, members of parliament, diplomats, representatives of international organizations, and security experts allowing them for discussing regional and global trends and current challenges. The main topics of the panel discussions and presentations at this year's conference included, among others, the security challenges affecting the Western Balkans, the European integration perspective of the region, and the war in Ukraine.

On the sidelines of the conference, Deputy State Secretary László Hajnik met with his Montenegrin counterpart, Major General Rajko Pešić, Director of Defence Policy. At the meeting, the main security challenges affecting the Western Balkans region were discussed, and the parties agreed on the development possibilities of bilateral military cooperation. Mr Hajnik emphasized that the stability and security of the Western Balkans is a priority for Hungary, and Montenegro is regarded an important partner in this respect. He also emphasized that Hungary is committed to further deepening the existing balanced bilateral military relations with Montenegro, as well as to the development of cooperation in the field of Defence.