The security of the Western Balkans is the common strategic interest of the United Kingdom and Hungary – said Defence Minister Kristóf Szalay-Bobrovniczky in a public media interview after his discussions in London on Monday. 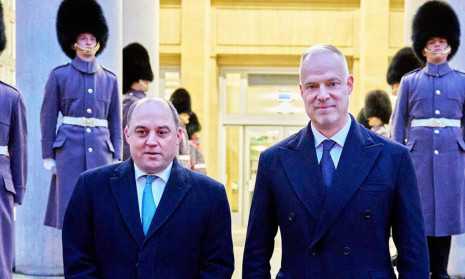 In an evening interview on Monday, the Minister of Defence, who had met with UK Secretary of State for Defence Ben Wallace, said that during a bilateral discussion “held in an atmosphere worthy of allies” they reviewed the current situation in the Western Balkans and along Hungary’s southern borders, and also talked extensively about the Serbian–Kosovan tension. The security of the Western Balkans is the guarantee of the Hungarian people’s security, and the United Kingdom, too, has long had strategic interest in it, so the views of the two countries were identical at earlier discussions on the topic, and remained so at the latest one as well, said the Minister of Defence.

Kristóf Szalay-Bobrovniczky said that he had informed his British counterpart about the experiences gained by Hungary of the illegal border crossing attempts on the southern border over the last few years, underscoring that the number of these attempts has increased, especially in the last one year. According to the Minister of Defence, the British partner was seriously interested in the related figures, data and experiences, since the United Kingdom is not present with military/police forces on this border section.

Speaking about the discussion held on the issue of the war in Ukraine, Kristóf Szalay-Bobrovniczky said that Hungary has been pro-peace since the outbreak of the war, and the British side knows and respects this strategy. It was stated at the bilateral meeting that Hungary unanimously condemns the Russian aggression and supports Ukraine primarily through humanitarian aid. The British assistance is implemented in other ways, but Ben Wallace highly appreciates Hungary’s performance in NATO, including its pledge to fulfil by next year the 2 per cent GDP defence spending target that the Alliance set for its member countries, said the Hungarian Minister of Defence in the evening interview in London on Monday.

Kristóf Szalay-Bobrovniczky emphasized that the strengthened Hungarian armed forces are continuously participating in international missions such as, for example, the Baltic Air Policing mission, the activity of the Kosovo Force (KFOR), and the enhanced Vigilance Activity Battle Group (eVA BG), which is deployed to strengthen Hungary’s eastern borders, with a mission of reinforcing NATO’s eastern flank.

Turning to the topic of the end of Britain’s EU membership (Brexit), the Minister of Defence said that before the Brexit, the United Kingdom had provided almost 40% of the European Union’s defence capabilities. At the same time, the United Kingdom remains a committed member of NATO, the British Armed Forces with independent nuclear capability are one of the strongest militaries in the Alliance, and of course, the country has not left Europe physically, said Kristóf Szalay-Bobrovniczky.

The Minister of Defence added that the EU, too, is seeking ways to strengthen its own security, and to become a defence provider for its own member countries. According to Kristóf Szalay-Bobrovniczky, at the same time it should be avoided that NATO and the EU become competitors; rather, the development processes of defence capabilities must be complementary.