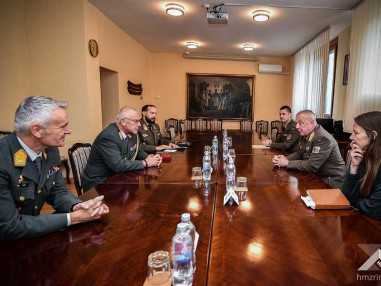 During the meeting, Lieutenant General Zoltán Mihócza said thanks for the Austrian support to the training of crews of the Hungarian Leopard 2A4 tanks, and highlighted the special operations forces cooperation between Hungary and Austria. The two sides agreed that another excellent example of the ongoing cooperation between the two countries is the task execution of the Austrian military engineer contingent in Hungary, which helped Hungarian soldiers during the reinforcement of the southern border closure in 2016–2017.

At the closing of the discussion, Lieutenant General Mihócza said farewell to the outgoing attaché and greeted Brigadier General Manfred Hanzl on the occasion of his taking office. The Chief of Staff of the HDFC expressed his hope that Brigadier General Hanzl’ contribution may further strengthen the successful military-to-military relations between the two countries in the future.